TFW2005HisstankTokuNationToyark
Tokunation › Kamen Rider › Another Zero-One and Proto-Zero One Revealed?! 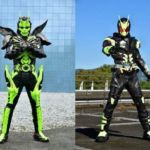 Toei isn’t quite done with the King of Time just yet. Recall back in September, that they announced a new crossover movie titled Kamen Rider Reiwa The First Generation Crossover featuring Zero-One himself and Kamen Rider Zi-O. Today, new details have emerged online giving us a glimpse at two new suits that will be used in the movie: Another Zero-One and Proto Zero-One!

Proto-Zero One supposedly uses a Force Riser to transform but the rest of the story details remain unknown at the time of this writing though we’ll be sure to keep you updated as they are made available.