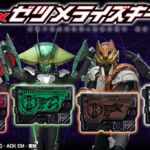 The four Zetsumerise Keys in question are:

The DX Zetsumerise Key set is currently scheduled for release in April 2020! Price is a modest 6600 Yen before shipping & handling.