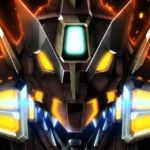 The anime producers at Studio Trigger have at last announced a follow-up to their Gridman anime series!

Titled SSSS Dynazenon this new project apparently features some familiar faces- and the appearance of at least one Gridman design missing from the first series.

A brief teaser trailer was also released with this announcement:

Sadly, no other details about this upcoming series have been confirmed at time of writing. Stay tuned to TokuNation as we keep you up to date on this exciting new project!