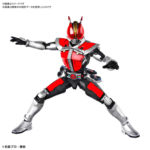 Kamen Rider Den-O has….arrived! In Bandai’s Figure-Rise Standard line of model kits and after our initial tease last year, we finally have more info on what goodies this upcoming kit will bring with him.

As the title suggests, the Figure-Rise Standard Kamen Rider Den-O kit will come bundled with parts for Sword and Plat Forms, the figure itself can transition in-between these forms via parts swapping. In addition to that, the kit will include a clear effect piece for the Den-Gasher though whether or not this kit will include additional Hissatsu Waza effect parts remains to be seen.

None of the less, we can expect Figure-Rise Standard Kamen Rider Den-O Sword and Platform to hit the shelves in June 2020. Retailing for 3850 yen wherever Bandai model kits are sold A great looking alternative for those that may not be able to afford the much more expensive Seihou figure!