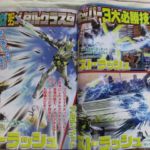 With another round of scans circling the Internet, we have some new insights into the upcoming adventures of Kamen Rider Zero-One!

In the coming month, the Riders will unite to defeat their greatest foe- Kamen Rider Thouser! With the competition at an end & all HumaGears in danger, the golden horned Rider must be stopped. Yua will rejoin A.I.M.S. to stop this massive threat, while Kamen Rider Jin actually fights alongside Zero-One!

To counter the rising enemy threats, A.I.M.S. will deploy a new type of soldier- the BattleRaiders! By using the mass-produced Invading Horseshoe Crab Progrise Key along with the RaidRiser device, BattleRaiders henshin for duty.

Finally, we will at last meet the 3rd member of MetsobuJinrai.Net– a mysterious figure known only as Naki.