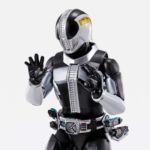 The next Kamen Rider for the highly popular Shinkocchou Sehou branch of SH Figuarts has been confirmed!

Fan favorite Kamen Rider Den-O takes the next Seihou slot, with his unique Plat Form configuration. This is Kamen Rider Den-O’s most basic state, fighting without aid from the Imagin creatures that normally give Den-O his powers.

And speaking of which, it seems another Den-O character is getting a Seihou release spot- the reveal stream that confirmed Plat Form also has an early look at a Shinkocchou Seihou based on everyones’ favorite climaxing swordsman- the Imagin Momotaros!

SH Figuarts Shinkocchou Seihou Kamen Rider Den-O Plat Form is currently scheduled for release in September 2020. The price is a modest 5500 Yen before shipping and handling.