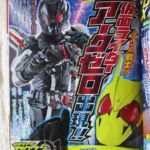 The latest round of magazine scans has revealed a new Rider joining Kamen Rider Zero-One!

This is our first look at Kamen Rider Ark Zero– a mysterious black Rider with a strange connection to the ARK satellite. Ark Zero uses a newer model Driver known as the Ark Zero Driver to transform. Ark Zero is said to be stronger than both Metal Cluster Hopper and Rampage Vulcan.

The face behind Ark Zero is not revealed at this time, but he may have a connection to the infamous MetsobuJinrai.net– with all four members reunited at last.

Who is Kamen Rider Ark Zero? Join in our Ongoing Zero-One Rumor Thread to share your thoughts on this strange new Kamen Rider!