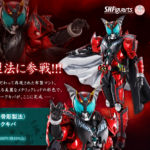 Remember when the joke was “everything before Kiva”?  Now it seems like everything is Kiva!  And we’re okay with that.  Tamashii Nations has announced the upcoming release of S.H. Figuarts Kamen Rider Dark Kiva!  Of particular note – the figure comes with a cloth cape!  Kamen Rider Dark Kiva is due for release in August for the price of 8800 yen.  Reservations for this hot and in-demand figure open on Friday, April 2nd (or late Thursday, April 1st for the Western hemisphere) and the item is a general release, so check your favorite online stores.