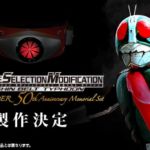 In honor of the 50th Anniversary of Kamen Rider, the Complete Selection Modification series will be going back to the beginning for a special release-

A CSM version of the Typhoon belt used by Kamen Rider 1 has been announced in the latest stage of Rider Week celebration.

Sadly, price and release details have not been confirmed at time of writing. Stay tuned to TokuNation for further reveals!