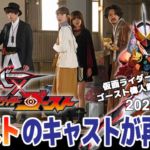 A brief teaser for the new crossover has been released online: