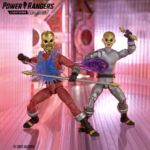 First posted early this morning by Power Morphicon and later removed, we now have a new look at an upcoming entry in the Power Rangers Lightning Collection!

This upcoming release is a 2-pack of the COG soldiers from Power Rangers Zeo! The Cog figures come in bronze & silver and include an assortment of weapons. The figures also include alternate “open” robot heads.

The Lightning Collection Cogs will apparently be exclusive to Hasbro Pulse. Price & release details have not been confirmed at time of writing.