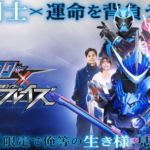 Following the recent team-up between Kamen Rider Ghost and Kamen Rider Saber on the Toei Tokusatsu Fan Club, another special Rider crossover has been revealed!