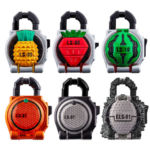 Don’t say no, just buy more!  Those were the lyrics, right?  Premium Bandai has announced the next Lockseed set in the CSM Kamen Rider Gaim product line.  Fans of the namesake Rider, Kamen Rider Gaim, will be happy to see these Lockseeds included – especially ones never before released in the previous DX line!

The last three Lockseeds listed have never been released as DX previously.

This set is scheduled to release in February 2022 for 13,422 yen via Premium Bandai.

While it has not been announced as to being released in North America, it is safe to assume this set, like each set before it, will be offered via North American specialty retailers with Bluefin Brands.