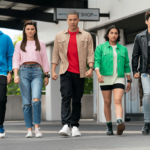 The Power Rangers franchise is making another big change!

After years of cable airing, the Power Rangers are becoming a STREAMING series. Netflix has purchased the exclusive rights to the second season of Power Rangers Dino Fury!

This new season will resume shortly after the first season left off, continuing the Dino Fury Rangers’ battle against the Sporix beasts.