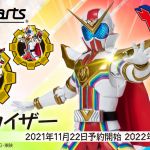 After seven years the heroes of Super Sentai make their triumphant return to SH Figuarts!

Official images of SH Figuarts Zenkaiser have now been released at this years’ Tamashii Nations event, showing the leader of the 45th Super Sentai Series Kikai Sentai Zenkaiger recreated in exquisite detail. This new release is scheduled for May 2022 with a modest pricetag of 6600 Yen.

But that’s not all!

It appears the Shinkocchou Seihou process with also come to the Super Sentai lineup, with the first choice being none other than Kaizoku Sentai Gokaigers’ GokaiRed! Unfortunately, no other release details for this Marvelous update have been confirmed at time of writing.

Bandai Japan is currently running a SPECIAL ONLINE SURVEY asking fans what they would like to see in the Super Sentai SH Figuarts lineup. Only time will tell what develops from this so be sure to stay tuned to TokuNation for further details!