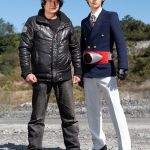 Toei has chosen a very unique anniversary celebration for the upcoming Kamen Rider: Beyond Generations movie!

A sequence of the film will take place in 1971 featuring the very first Kamen Rider, Takeshi Hongo. Previously this role had been played by legendary actor Hiroshi Fujioka but at 75 he no longer resembles the original character.

The role instead falls to Maito Fujioka– Hiroshi’s own son!

A recent video interview with Maito Fujioka discusses the importance of the role & confirmed that his father remained on set for filming.