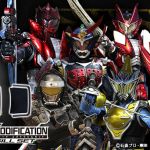 There is a belief that every single Lock Seed in Kamen Rider Gaim is going to end up being released for the CSM Sengoku Driver.  It appears we’re one step closer to that realization.

The set is being released July 2022 in Japan with an estimated release in the United States in September 2022.

Pre-order your Kamen Rider Gaim CSM Yggrasill at our site sponsor Tokullectibles today!  Pay with a Deposit, in Full, or (if you quality) 4 payments via ShopPay!