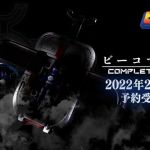 Bandai Japan has a special surprise on the horizon for Metal Hero fans!

A Complete Edition of the B-Commander device used by the Juukou B-Fighther team (known to Western audiences as the Big Bad Beetleborgs) has been announced! Pricing & release dates are not confirmed at time of writing.

Orders will officially open on February 3 2022.