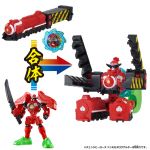 Bandai Japan has revealed some new entries in the 46th Super Sentai toyline!

The series Avataro Sentai DonBrothers marks a break in tradition for Super Sentai- instead of the regular DX Mecha releases the DonBrothers will instead have new forms released as part of the Change Heroes subline.

Both Change Hero DonBrother Alters are set for release in March 2022!