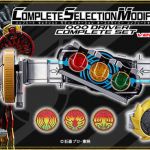 Premium Bandai has released the full details for a selection of Complete Selection Modification releases celebrating the 10th anniversary of Kamen Rider OOO!

The centerpiece of this release is the CSM Kamen Rider OOO Driver Complete Set Version 10th which includes all Core Medals from the series AND the upcoming reunion movie, along with new music & voice effects provided by Shu Watanabe’s Eiji and Ryosuke Miura’s Ankh. A total of 69 compatible Core Medals will be included with this release, and one non-functional Core: the broken Taka piece from the shows’ final episode. The CSM OOO Complete Set Version 10th will be released in September 2022 and has a pricetag of 59950 Yen.

For those wanting a slightly cheaper option, Premium Bandai will also be releasing the Complete Selection Modification OOO Driver Version 10th– which features only the basic 24 Core Medals seen in the Kamen Rider OOO TV show plus 3 Eternity Medals based on the reunion movie. This set will cost only 31130 Yen and is also set for a September 2022 release.

In the event collectors already have a functional OOO Driver, Premium Bandai will be releasing a new CSM OOO Scanner Version 10th with updated software for the new Eternity Core Medals come September 2022. This will cost 12980 Yen.

Finally, a new release of the Complete Selection Modification OOO Medal Holder will round out the 10th anniversary Kamen Rider OOO offerings. This Holder can carry up to 24 Core Medals. Price for this release is a mere 3850 Yen.