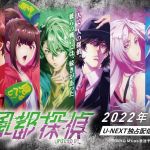 At last a teaser trailer has been released for the upcoming Kamen Rider anime project- Kamen Rider W: Fuuto PI!

This project is a sequel to the 2009 series Kamen Rider W and features series leads Shotaro & Phillip taking on a new adventure in their Windy City.

Shotaro will be played by voice actor Yoshimasa Hosoya while Phillip will be voiced by Koki Uchiyama– both reprising the roles from the Memory of Heroez video game.

Rounding out the cast is Mikako Komatsu as Akiko & Makoto Furukawa as Ryu Terui/Kamen Rider Accel. New characters for this W installment include Tokime (played by Akira Sekine & Bando (played by Daisuke Ono.