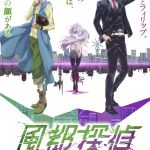 An official release date has been announced for the upcoming Kamen Rider W: Fuuto PI anime project! This new venture will begin on August 1st 2022 on the U-NEXT streaming service, with the traditional broadcast schedule beginning August 8 2022.

In addition, some Kamen Rider W veterans will be returning for the series on the musical side-

*The Fuuto PI theme song- Crime, Punishment & The Underground is composed by Kouji Kikkawa (better known as Kamen Rider Skull) and will be performed by Mitsuru Matsuoka– Kamen Rider Eternal.

Finally, the anime streaming service Crunchyroll has confirmed Fuuto PI will be part of their Summer 2022 lineup- so Western fans will have a chance to enjoy this new Rider adventure!