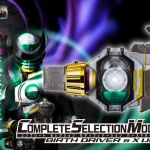 This latest CSM release is the Birth Driver– the device used by Kamen Rider Birth! The Driver has been recreated in superb detail, and will be offered in multiple formats:

*The basic CSM Birth Driver with a set of 3 Cell Medals will be released in December 2022 priced at 19800 Yen.

*An expanded release including the X-Unit & Core Medals from the Kamen Rider OOO 10th Anniversary special will also be produced. This set will cost 29700 Yen and is also scheduled for release in December 2022.

Finally, Premium Bandai will be offering a rerelease of the Complete Selection Modification Cell Medal Set! This special release of 24 Cell Medals will be compatible with the new Birth Driver. The Cell Medal set is scheduled for a January 2023 release with a price of 11880 Yen.