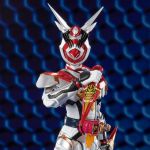 The live stream which announced the figure can be viewed in the box below, and see the figure in more detail you can skip to the 10:43 mark: