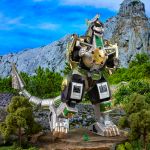 The ZAP Dragonzord is advertised at 1/144 scale and combines with the soon-to-be released ZAP Dino Megazord.  The mech contains changeable hands, finger-missile accessories, features chrome detailing, and an all new original concept design styling.  The ZAP Dragonzord is available for pre-order for roughly $132 across various fan channels.

Order it at BigBadToyStore.com by clicking here.

Check out all the official images after the jump.