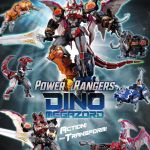 After much speculation and several early teasers, we now have official images of the Flame Toys Dino Megazord release!

While based on the iconic Mighty Morphin Power Rangers design, this new release takes a heavily stylized approach to the classic look and adds a number of new details. The DinoZords for this set are fully articulated and transformable. The combination measures 24 centimeters tall (roughly 9.5 inches) and is reinforced with diecast parts.

AND Flame Toys is not stopping with just one Power Rangers release! Some teaser images for a compatible Dragonzord have also been published, again revamping the iconic appearance with some extra flair.

The Flame Toys Dino Megazord set is currently scheduled for release in July 2023. Price is a modest $400 before shipping and handling. A price & release window for Dragonzord has not been confirmed at time of writing, so stay tuned to TokuNation for further details on this exciting new offering for Power Rangers fans!