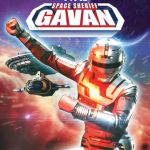 A fan-favorite and classic Metal Heroes tokusatsu property – Space Sheriff Gavan – is now available on Blu-Ray to pre-order thanks to Discotek Media.

Years ago, Space Sheriff Gavan’s father was betrayed to the interstellar crime syndicate Makuu. Now, Makuu has set its sights on Earth, the home- world of Gavan’s mother, and the planet where he spent his youth. With his transforming assistant Mimi, his powerful silver combat suit and his interdimensional battleship Dolgiran.

Gavan will fight back against their Makuu’s greedy ambitions tooth and nail. Will he find his father in the process?! Kenji Ohba heads up an all-star production that would kick off the Metal Hero franchise and change the medium of tokusatsu forever! This complete collection includes all 44 episodes in 1080 high definition, with the original Japanese language and English subtitles!

Click here to pre-order your copy now!  Space Sheriff Gavan storms in to your Blu-Ray player on October 25th, 2022!