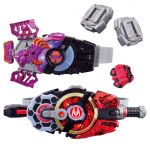 Fans of the Kamen Rider brand have been waiting a long time for the ability to purchase current-year merchandise locally in the United States and North America.  It was announced not long ago that – finally – it was happening.  Kamen Rider Geats, the upcoming Kamen Rider series in Japan, will have their DX items release in both Japan as well as the US.  That means spending less money on these items because you’re not having to pay to import them.

You can order them online from both of our site sponsors – BigBadToyStore and Tokullectibles!  And we’ve compiled the current list for you right here!

Fans can also reach out to their local comic book stores and hobby shops that carried Bluefin Brands or Bandai Collectibles merchandise in the past to place an order for these items.  Additionally, there may be product carried in the future on major retailer sites like Amazon.com.  Stay tuned for future announcements.

Site sponsor Tokullectibles also has available items that are NOT being brought over to the US/North America, which you can order here.