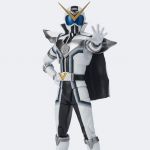 There was much rejoicing followed by some tears as Tamashii Nations revealed two of their upcoming exclusives for the Tamashii Nations 2022 Event.  This year’s event will see S.H. Figuarts Kamen Rider Jack Revice from Kamen Rider Revice, as well as Zenkaiser Black from Avataro Sentai DonBrothers.

The details on the two S.H. Figuarts figures are as follows:

Fans who want these will likely be paying a bit more than the suggested retail price.  But hey – at least it isn’t another January 2023 release, right?  Tamashii Nations 2022 Event takes place November 18th through November 20th, 2022 in Japan.