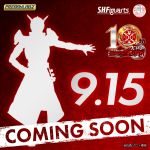 No other info was given for this upcoming release, though there’ll supposedly be another announcement made in regards to this figure on September 15, 2022, so be sure to check back with us then and we’ll give you more updates as soon as it comes up.