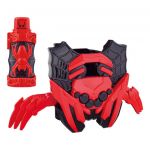 The experiment isn’t over!

Bandai has announced two new items for Kamen Rider Build fans – the DX Fullbottle Final Set and the DX Kamen Rider Killbus Spider Fullbottle!  Team Kamen Rider has also shared that these items will be available in the US.

The DX Fullbottle Final Set contains the following fullbottles that did not see a proper DX release:

Japan pre-orders are available from site sponsor Tokullectibles below.  Stay tuned for US pre-order details.

Shall we begin the experiment?