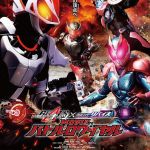 Toei has released the first teaser for the upcoming Kamen Rider crossover film!

Movie Battle Royale is scheduled for release on December 23 2022.