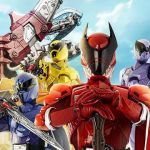 With the first images of the 47th Super Sentai now released, some new information about this upcoming series are coming to light!

Ohsama Sentai King-Ohger is the story of five Rulers who unite from across their kingdoms to defeat the Earth Empire Bugnarok.

*KuwagaOhger comes from the nation home to the guardian deities Shogodam- which will be the source of the series’ Mecha.
*TonboOhger hails from a civilization of great technology
*KamakiriOhger is the Queen of a land specializing in arts & medicine
*PapillionOhger represents a world of ice and snow
*HachiOhger leads a land of agriculture

With the power of the Ohger Caliber and the Kings Weapon shield, the five Rulers become the Ohsama Sentai King-Ohger!