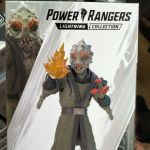 The Power Rangers team at Hasbro has recently announced a live stream on Tuesday, January 17th promising to showcase new products and pre-orders.  However, it seems the product they planned to announce has already reached the sales floor.  A fan in Singapore (@jayershan) has found and shared images of the upcoming Power Rangers Lightning Collection Dino Thunder Mesogog figure.

On top of that, @riders_heroes.grid on Instagram has shared some images out of package, including some comparisons with the Dino Thunder Power Rangers.

Mesogog will be announced at some point, or he won’t, but you’ll be able to buy him soon enough.