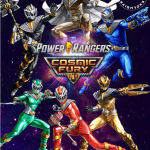 After some initial teases we have our first proper look at the Ranger uniforms for the next season, Power Rangers Cosmic Fury!

The Cosmic Fury season will have all new Ranger suits designed by Sarah Voon and new weapons designed by Tracey Collins. While the Dino Fury team returns for this season, there have been some changes- former Dino Fury Pink Ranger Amelia is now the Cosmic Fury Red Ranger and the first female Red Ranger leading a series in the history of the Power Rangers franchise!

Some brief story details have also been released: Cosmic Fury will focus on the Rangers’ adventures in space as they unlock new powers and fight against the sinister Lord Zedd.