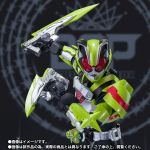 Everyone’s favorite ninja is on their way – Kamen Rider Tycoon is coming to S.H. Figuarts!

The figure continues the ability of the other releases in the S.H. Figuarts line for Kamen Rider Geats, where Tycoon comes with parts to be able to re-create his “entry” form (requires the entry-form of Kamen Rider Geats, releasing separately) as well as combining other parts of the other released/releasing riders (Geats and Buffa) to create unique combinations shown (and not shown) in the show.

While there is currently no information on a US release, the official page of information for this release does state Japan, Asia, and US as intended sales areas for this item.  Previously, the Premium Bandai Japan release of Kamen Rider Buffa has been made available on Premium Bandai USA.  Stay tuned.