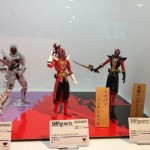 AmiAmi has taken a bunch of photos from the Tamashii Nations 2011 and revealed them via their twitter account @amiami_figure. Among them are pictures of future Sentai figuarts!

Pictured are DekaRed, DekaBlue and DekaGreen from Tokusou Sentai Dekaranger, along with the Hyper and Gedou versions of Shinken Red! Also pictued is the already revealed Juzo figuart.