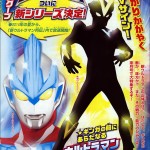 Several weeks ago we reported that a new Ultra trademark had been filed, using the name “Ultraman Victory.”

Today we received our first official image of this new hero! Although most of the suit is obscured, we can see certain impressive details- including a consistent “V For Victory” theme.

The exact details of the series have not yet been revealed but Ultraman Victory should make some appearances with current Ultraman Ginga during the “New Ultraman Retsuden” special programming over this summer. Stay tuned to TokuNation for further details!!