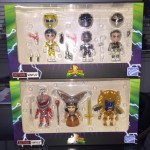 Big news if you’re a collector of the awesome The Loyal Subjects vinyl figures! For those of you who have been paying attention – we’re getting a few of the translucent Mighty Morphin Power Rangers at this year’s San Diego Comic Con 2015. But many fans noticed it is incomplete – many team members are not going to be included in the translucent variety.

Well, The Loyal Subjects have you covered!

Join in the discussion! Are you going to grab these figures? Is there even a Hastings store near you? Sound off!