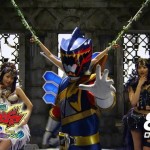 After the first teaser for Zyuden Sentai Kyoryuger’s summer film streamed a couple days ago we got our first impressions of the latest Kyoryuger rumored to be called Kyoryunavy. As it turns out his name is actually Deathryuger, and if the name doesn’t imply it enough that he’s evil then the trailer should as he’s seen fighting Kyoryured. Deathryuger is an ancient knight who prefers to be called D and has kidnapped an idol acquaintance of Daigo’s named Meeko. His goal is to rejuvinate the #00 Zyudenchi and revive Tobaspino. Perhaps music is the key?

It’s also been confirmed that Deathryuger will have a voice actor, implying that there will be no out of suit actor for the character. But fans rejoice! Deathryugers’ voice actor will be none other than Mamoru Miyano, the voice behind Ultraman Zero and Gundam 00’s Setsuna F Seiei!