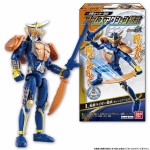 Bandai Japan has revealed[/URL] their upcoming Kamen Rider Gaim candy toys! These figures are planned for release this month on the 26th for 380 yen each. Each is fully articulated and 4″ tall. Shown so far are:

Thanks to algo448 for the heads up! Read on to check out the new figures!