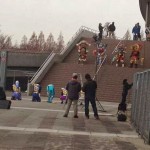 Thanks to a rather sly fan catching the filming of an upcoming Zyuden Sentai Kyoryuger episode it looks like we may be seeing more of Deathryuger in the coming weeks.

Deathryuger is of course the false Kyoryuger/villain of the summer film, Gaburincho of Music. Using the stolen battery for Tobaspino the Knight of Brutality D became Deathryuger. However recent events from the series have laid that character to rest and left the #00 battery in the Kyoryugers capable hands. Your guess is as good as ours on who this new Deathryuger may be.

Miko? Tessai’s descendant? Dantetsu Kiryu? Could this merely be a dream sequence? All we know for sure is that the Kyoryugers will be facing the 4 resurrected Debo Monsters that represent the 4 seasons of the year and that Deathryuger is featured in the ranger line-up between Blue & Green.

Time to speculate away!