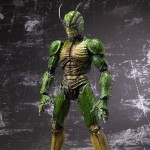 Revealed only last week Bandai has already put up official images for the upcoming S.H. Figuarts Kamen Rider Shin! These much clearer images really show off the amazing organic insect design of the Shin suit. Shown to include an alternate head with open mouth and extra sets of hands, Shin is lite on accessories but then again what else would they really be able to include? Shin is unfortunately one of several bike-less riders.

S.H. Figuarts Kamen Rider Shin will be released in May 2014 as a Tamashii Web Exclusive for 4320 yen.