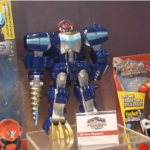 Nuremberg Toyfair is currently ongoing and of course Bandai of America is there with their current offerings for Power Rangers Super Megaforce.

Most of what’s on display is what can be currently found at US retail. However we do get our very first looks at a couple of brand new products as well! On display at the show are:

Check out the video of Bandai’s display from youtube user Atamaii.TV.