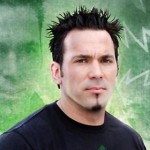 If you’re a fan of the Mighty Morphin Power Rangers then you might be interested to know that Jason David Frank, who played Tommy Oliver the Green Ranger and White Ranger in Mighty Morphin Power Rangers has released the first episode of his documentary My Morphin Life through the popular YouTube channel BatInTheSun. The video is shown below. If you’re hoping for some cool behind-the-scenes Power Rangers footage, you’ll be sad to see that there is none. And there looks to be none in the next episode. This series looks to be, for the moment, strictly about the man behind the helmet, Jason David Frank.

NOTE! If you only see a black screen with audio, change the video’s resolution settings, then switch it back to what you want. This will fix the problem immediately.

So what did you think? Are you going to tune in to the next episode of My Morphin Life? What could be added or removed from the show to make it better, or is it pretty awesome as is? Sound off!