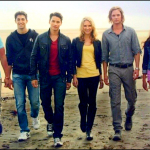 The red Super Megaforce Power Ranger, Andrew Gray, tweeted out an image today advertising this week’s episode of Power Rangers Super Megaforce!  Unfortunately for Andrew, he’s about three weeks early – because his image gives us the first look of Cameron Jebo, aka Orion the Silver Ranger – who isn’t set to debut until the end of the month!

Click the title bar to see the full image!  Special thanks to Fury Diamond of RangerCrew.com for the initial find and to Morgan Lamia from RangerBoard for the image from Instagram!