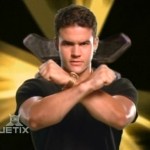 With all the drama the last week, this is a real feel good story for fans of Power Rangers. If you grew up watching Mighty Morphin Power Rangers then you should know who Austin St. John is – he played Jason, the Mighty Morphin Red Power Ranger. After leaving halfway through season 2, he returned in Power Rangers Zeo as the new 6th Ranger, the Gold Ranger. He hasn’t been public with the Power Rangers fan community for a number of years but his Official Facebook Page recently announced his return – and now he’s coming back to the Official Power Morphicon Convention this August. His message was put on YouTube and can be seen below.

We would like to welcome Austin St. John back to the Power Rangers community, especially at a time when the fan community needed it the most. Please take the time to ”Like” the Official Austin St. John Facebook Page as he will begin posting on the page himself in time. Please click the “Discussion” link to share your favorite memories of the character Jason Lee, the Mighty Morphin Red Ranger and Zeo Gold Ranger. And while you’re at it, head over to MorphinMadness.com and vote for those two characters. #VoteZeoGold #VoteMMPRRed