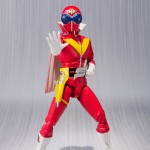 File this under pleasant surprises. Apparently scheduled for release in September 2014 are two long awaited releases. S.H. Figuarts Aka Ranger from Himitsu Sentai Goranger. You may recall that this figure hasn’t been seen since it was displayed at Tamashii Features Vol 3 in 2012.

And then there’s S.H. Figuarts Bio Rider from Kamen Rider Black RX who was only glimpsed thanks to SHFindo back in March!

Release details haven’t been confirmed for either figure yet, but the Tamashii Web Page is stating these will be released in September. And they’ve provided several official images of each figure!