Welcome to the first of many Power Rangers Mondays here at TokuNation.com! Every single Monday we will have an article focused on all things Power Rangers. Whether it be relevant to something in the news or fun facts or even just something off the wall, we’re committed to bringing you something fun and interesting to read about Power Rangers!

We’re kicking off our first Power Rangers Monday in style with an article focused on the upcoming series Power Rangers Dino Charge, which is to be an adaption of the popular Zyuden Sentai Kyoryuger series. And what better way to start off that whole area of discussion than with an article all about adaption – namely, our list of what we consider the Top 5 Things We Want to See Adapted from Kyoryuger.

So charge those batteries and brave in to our article by clicking “Read More”! And once you’re done, join the discussion and tell us what YOUR top 5 things are that you believe should be adapted. Enjoy!

We have a date (August 20th). We have a location (New Zealand again). We have a name (Dino Charge). And we have an Executive Producer (Judd Lynn). And, before we know it, we’ll have a cast of Power Rangers. And then it’s off to New Zealand to begin filming and production of the American adaption of Zyuden Sentai Kyoryuger in to Power Rangers Dino Charge, the 21st (yes, that number is up for debate) Power Rangers series.

Something that is always fun to speculate on is exactly what, and the how, stuff will be adapted from Zyuden Sentai Kyoryuger in to Power Rangers Dino Charge. Just like with the adaption of Kaizoku Sentai Gokaiger in to Power Rangers Super Megaforce, many things were NOT adapted (Basco, an actual pirate theme to the story, the origin of the Silver Ranger powers) and other things were surprising to all of us (the inclusion of Vrak from Megaforce carrying over to Super Megaforce, the Legendary Battle happening at the END of the series instead of the BEGINNING, etc.).

So strap in for the first segment of Power Rangers Monday as we talk about the 5 Most Important Things from Kyoryuger that MUST be adapted! Spoilers ahead for Kyoryuger and older Power Rangers series, so be warned!

NUMBER 5 – The Go-Busters vs. Kyoryugers Movie

Okay. Hear us out on this one.

While Tokumei Sentai Go-Busters is indeed being skipped in favor of Zyuden Sentai Kyoryuger in terms of adaption to Power Rangers, the sheer fact that movie features two of the most popular Power Rangers teams in the franchise’s history joining forces with Kyoryuger (or Dino Charge) is too much to pass by. What’s the big deal? Let’s paint the picture a little bit for you.

The story basically revolves around an evil creature from the stars that hates dinosaurs. The story then has the bad guys revive the villains from Go-Busters (Enter and Escape), but more importantly, revives Goldar from Mighty Morphin Power Rangers and Zeltrax from Power Rangers Dino Thunder in new, powered-up bodies. They need “dinosaur power” to bring forth this big bad alien, so the bad guys end up kidnapping the Mighty Morphin Red Ranger and Dino Thunder Red Ranger to drain them of their powers. 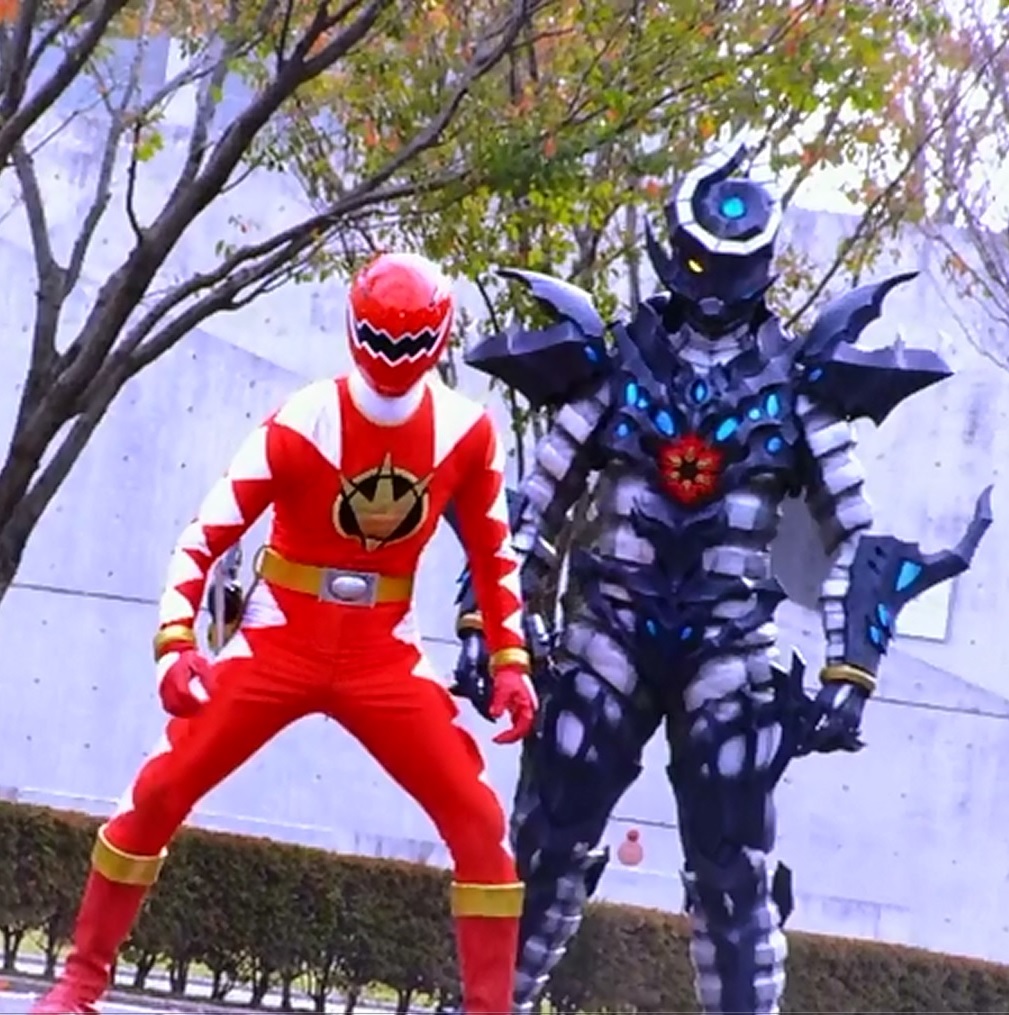 On the left – Goldar with Putties. On the right, Zeltrax and Dino Thunder Red. Triptoids also return but aren’t pictured. 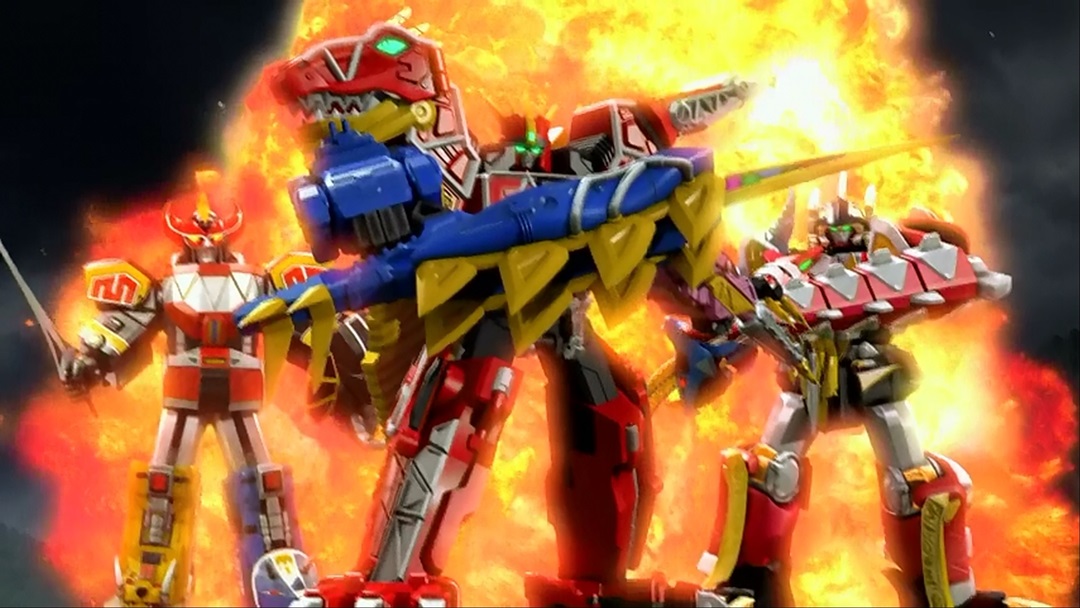 We didn’t put the CGI model of the original Tyrannosaurus Dinozord here for a reason. Let’s hope they redo that one…

With the announcement of a new Mighty Morphin Power Rangers, this movie being adapted as a special in 2016 just seems to perfect to pass by. Plus, it would truly feel like a proper homage to the franchise where Super Megaforce failed to deliver. Make it happen, Judd Lynn!

Before anyone shoots us at the premise of having Candelilla be adapted, think of the story ramifications the character had in the story of Kyoryuger. Not only did she eventually switch sides and help defeat Chaos in Hell, but she also fell in love with the Blue Ranger which really helped her character’s switch from evil to good feel believable.

DoGold has an obvious important part of the story with his relationship with the Gold Ranger. And Endorf would bring back a fun tidbit that harkens back to some old favorite Power Ranger series – a villain who is at odds with the other villains. Who doesn’t love general in-fighting? DoGold and Endorf hate each other (considering one has the emotion of anger and the other of resentment, it’s pretty natural I suppose).

Luckyuro is responsible for making monsters grow, and helps strengthen the character of Candelilla and is an easy character to bridge the gap between evil and good to persuade the Candelilla character to make the switch. If they are adapted correctly, they could be a huge boost in terms of story-telling devices in Dino Charge. If they’re adapted incorrectly, they are simply footage placement until the footage requires them to be gone for whatever reason.

JUST KEEP SMILING! – Candelilla, as many fan boys clap along in a manner that frightens the rest of us…

Do it justice, Chip!

NUMBER 3 – The Theme of Music Being Used

Another possible cringe-worthy idea but again, hear us out.

One of the strongest things that Kyoryuger had going for it was the music in the series. There are some simply beautiful music pieces throughout the series, and the music remains an underlying theme for the entire show. How many times does a song stop a bad guy or cause them to lose their powers? How do the Rangers do their Kyoryu Change? Exactly – all of it is from music.

We’re not calling for the Power Rangers to do a dance number in the credits (but how much fun would that be?!) but music has always been an important part of every culture in the world throughout the history of mankind. Again – it has to be done correctly, but with Judd Lynn in charge as Executive Producer, we feel that the franchise is currently in the right hands (it’s kind of like Bryan Singer returning for X-Men Days of Future Past but in a Power Rangers sense).

NUMBER 2 – The Gaburevolver as the Morphing Device

This one is tricky – try to sell a children’s show to any network in the United States of America right now where the “morphing” device is a gun that you charge and shoot at someone. While those of us who don’t fall prey to the notion that the audience are idiots that do whatever the show does, try explaining it to parents or those who feel television already is a reason for mass shootings. “Hey kids! Take this gun, charge it up, put a battery in it, THEN SHOOT IT AT THE BAD GUYS TO BECOME A HERO!”. So in all honesty, the odds are totally stacked against us at this point.

But the last time it was decided to change the morpher (other than Samurai), we got sunglass morphers (hello Jungle Fury!). So what would we get stuck with this time?
It’s hard to say. But the Gaburevolver was involved in so much footage and really works as the ultimate device that links the Rangers to the Dinosaurs they get their powers from, how do you even begin to change that? The worry is that by changing the morphing device that the footage won’t make sense, aside from the fact that it’s just cool as heck. How do you call upon special powers (not the zords or armored mode, but the special abilities utilized from time to time)? You put a battery in the gun and shoot it at the bad guy.

Can the Gaburevolver defeat it’s toughest challenge – fears of being blamed as a scapegoat for shootings?! 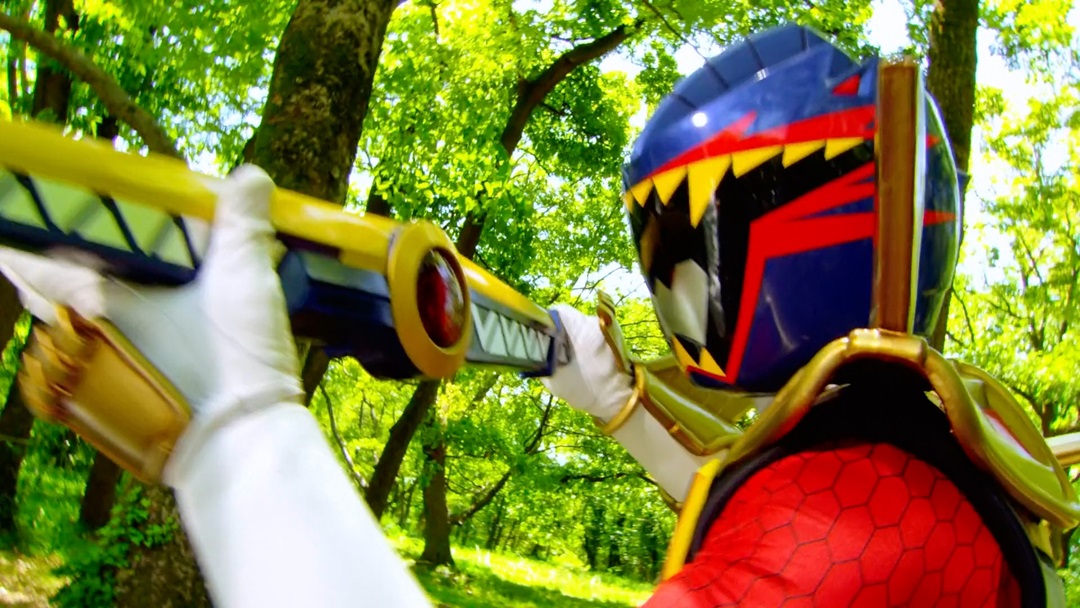 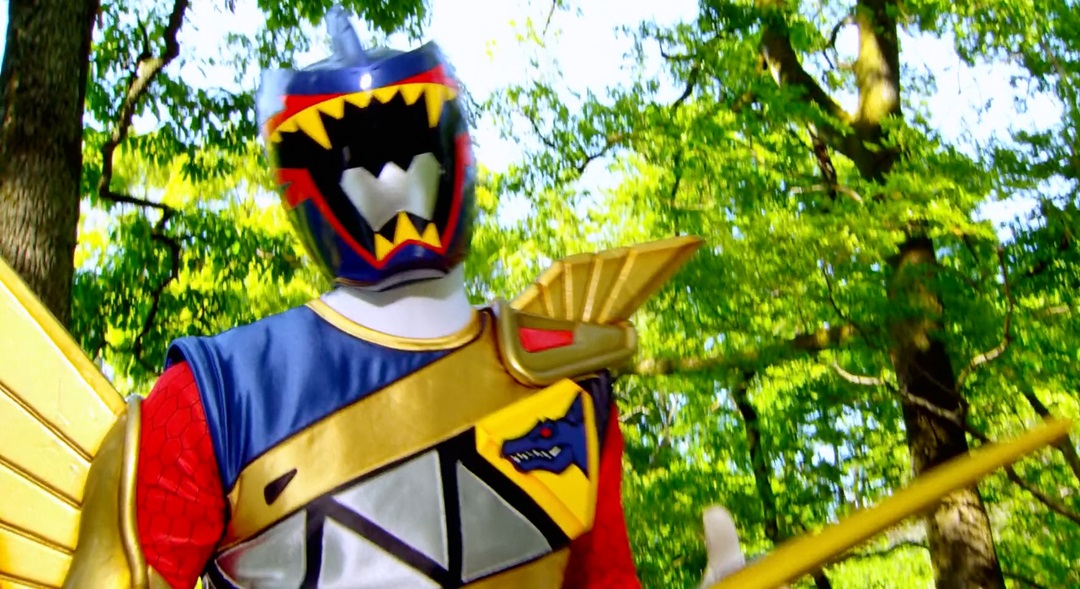 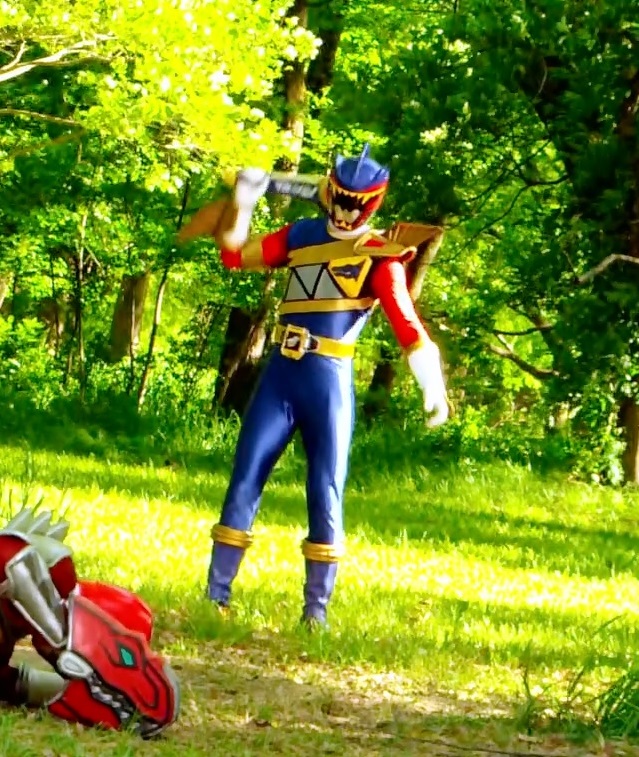 Everybody loves the evil Power Ranger. Will we get one in Dino Charge?

There’s just something about evil Power Rangers that fans end up adoring. You have only one in Kyoryuger, and that’s Deathryuger. Making it more difficult to adapt is the fact that he ONLY appeared in the Kyoryuger summer movie, and to top that off, a majority of his scenes are with Japanese actors or actresses in the same shot, meaning a majority of his footage would need to be re-shot.

But he plays an electric flute keyboard hybrid that doubles as a boomerang, and he kicks a lot of butt. He also has his own zord, which can form its own Megazord, making him even more of a menace. While his inclusion in to the Dino Charge adaption looks less and less likely the more we think about it, we can’t help but hope that Judd Lynn has yet another miracle up his sleeve, and can bring this Deathryuger back to life for Dino Charge … and maybe even make it the 11th Power Ranger on the team. 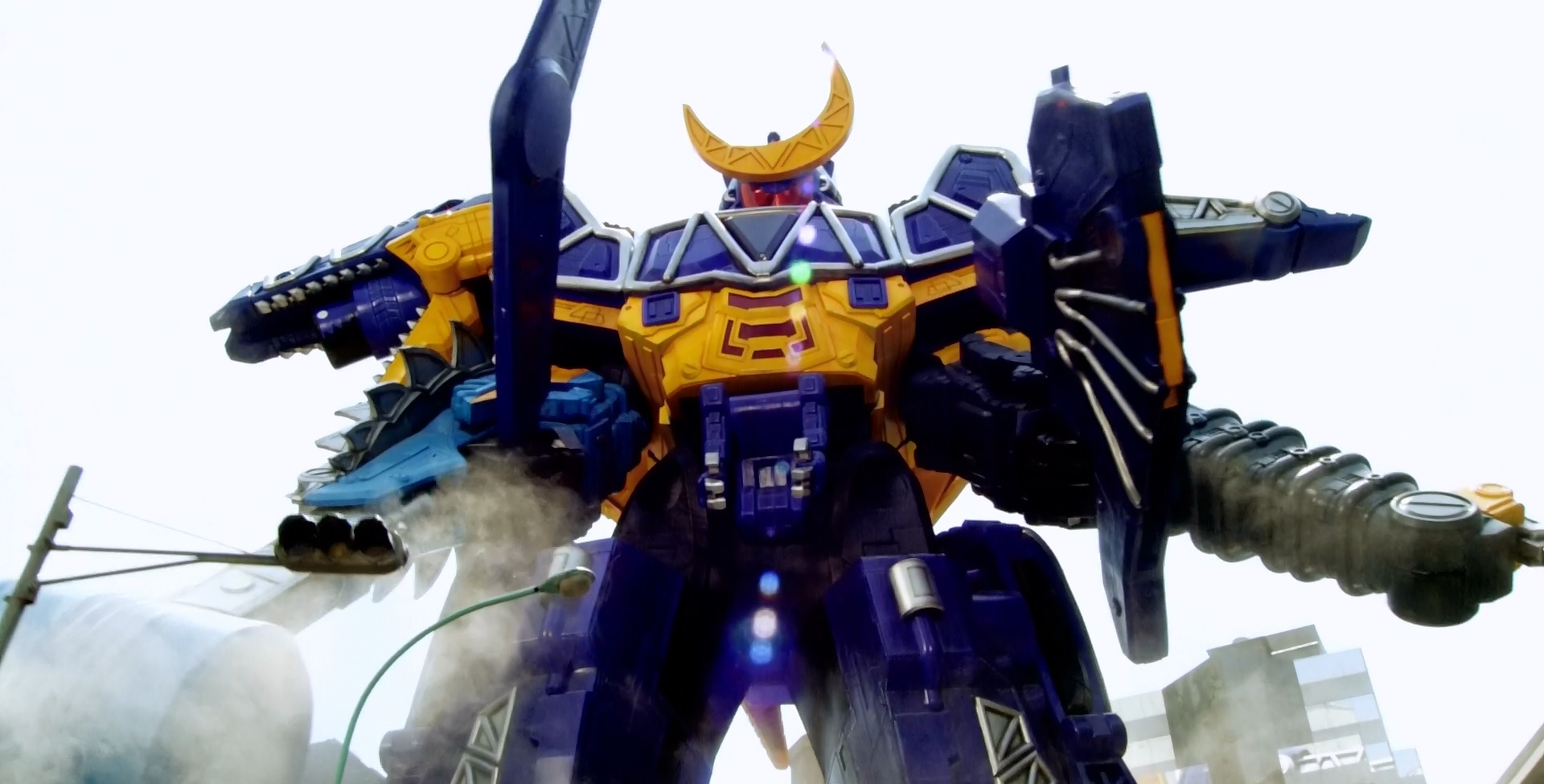 Evil Power Rangers are even cooler when they get their own Megazord.

Join us next Monday for another segment of “Power Rangers Monday”! Please join our discussion thread and share your thoughts on this article and what your five top must-adapt-points from Kyoryuger are!