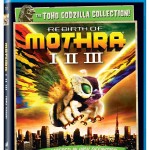 Each film will be digitally remastered in High Definition and feature English and Japanese language audio options. All three Blu-ray releases come with UltraViolet.

Start saving up, these Blu-ray sets are just 3 months away! Read on to see the covers.